Ok, ok, the photo shows a Biergarten in Konstanz, Germany. The Leesburg beer garden is a thing of the past. 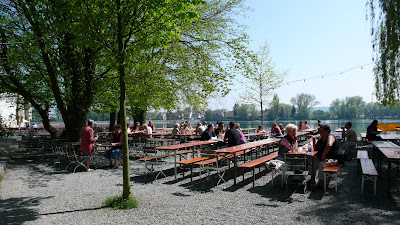 I was intrigued when I found this book in the Leesburg library: Hitler’s soldiers in the Sunshine State, German POWs in Florida by Robert D. Billinger, Jr. Florida had quite a few camps for POWs. Among those, one was located in Leesburg. It housed a few hundred German prisoners of war. Let me quote a few passages.
“The Germans worked in citrus groves, packing plants, and truck farms in Leesburg, Eustis, Tavares, and Mount Dora.”
“ Karol Borodine, who used prisoners to pick fruit, said, ”They were marvelous and honest workers.”
“Delegates from the International YMCA and from the International Red Cross who visited the new camp location (editor: on today’s Community College Campus across from the airport) found a degree of good humor and goodwill not usual in other camps.”
“The POWs and American service men from the searchlight battery were down there splashing about , swimming, joking, laughing, just having a real good time together.”
“Under the palm trees and live oaks covered with Spanish moss, there was a beer garden that the Germans constructed for their after -work relaxation.”
Posted by Advisor at Saturday, October 03, 2009